Brenda and I had fixed – more or less at random – on a brown-and-white animal. Damien is slender and smallish, so nervous interlopers sidle in, as if they just happened to stroll past with a handful of food pellets...

"B," I say to the Atlanta-based diva, "They're bogarting our beast."

"That's bullshit," she replies. "Let's get a better one."

Hobbes is the camelid nobody wants. He's large and feisty, with good conformation (llama-breeder-speak for "good posture and overall shape"). The problem is that a 14-year-old "hit him upside the head with a 2x4 repeatedly," before Stuart Wilde rescued him.

This gentle fellow runs Wild Earth Llama Adventures. He rehabilitates unwanted critters as pack animals. Poor Hobbes was so distressed, he spent months munching grass. "Then one day he finally crowded in with the herd, as if saying, 'take me too!'" Stuart notes.

So Hobbes treks. But that does not mean Hobbes behaves.

Don't get me wrong: In our company, he doesn't commit any truly offensive llama acts: spitting to establish dominance or castrating other males with his hooked fighting teeth...

But his impatient hum – a sweet note elsewhere – is more a strangled bellow. Hobbes wants to go. NOW. Very fast. At the front of the group. And exactly where he pleases. 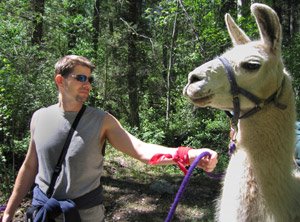 Our friend Jonathan helps wrangle the llama. This requires a pretty firm character and strong arm.

Hobbes balks. Hobbes blunders into the underbrush, devouring shrubs. Hobbes races down the trail, impatient, then freezes when he realizes the herd has fallen far behind and disappeared over the horizon.

The Hobstacle hangs over my shoulder, groaning with impatience. "Goooooooooo!"

We get the pets and children we deserve, according to conventional wisdom. But pack llamas?

Posted by Amanda Castleman at 9:55 PM