DRIFTS IN MY DECOLLETE
We burst from Quebec's drill house, shouting as we jog over the packed snow. As we near the Snow Bath mound, rows of mittens jut; swaddled observers high-fiving, as we race past in our swimsuits.

What now? I'm outside. The air hurts my lungs, never mind my exposed skin. People are down rolling in the powder, so I give it a try.

Yup. Just as cold as I expected.

I swivel towards the media section. I see shark-hats, yes, a lovely gesture of support. More intimidatingly, I see the snouts of two dozen cameras. Big, black professional jobbies.

What am I doing on this side of the rope? Why didn't I just give this curious ritual 80 words – or stick with the time-honored three-source article? Why is my ass on the line? In a snowy bikini, no less?

Career shock aside, two things stand out most from the experience: fatigue – physical and choreographical.

Go on, you just try frisking in a drift before thousands of people and the international media. Roll around. Shower crystal flakes into the air. Swing dance with companions. Bury some foolish boy. After about 180 seconds, the average snow bather is fumbling, desperate for new moves.

And I, well, I am tired. My winter of discontent has been an inactive one. Forty-five minutes of aerobics and running has knackered me. Forget the cold. I just want to sit down.

The first round – two minutes – concludes. We race back inside the gym. "Le Bleuuuuuu," we holler at the waiting corps. That's right. We're VETERANS. Take that, you neon-pink shrimp.

"Go, Seattle!" someone shouts. We're all hugging and backslapping like Superbowl celebrants. Anyone would imagine we'd captured ancient Troy, not endured a small, man-made mound of snow and humiliation in Quebec, Canada.

Pauline lends me a towel to wipe dry. My skin is mottled, cold to the touch. "Bien?" she asks.

She smiles and pats my shoulder. Literally, we comprehend little. But together, we understand much.

Too soon, Le Bleu boomerangs back into the cold. As the organizers promised, the second round isn't so tough. Until Stuart – the photographer with whom I'm collaborating – shouts, "the Associated Press is here. The guy's asked your name about six times."

I conga past the press pit and a shooter yells, "are you Amanda Castleman from Seattle?" I nod, then purposefully obstruct his line-of-focus as much as possible. Damn. I write the news, not star in it. And anyway, back off my scoop! 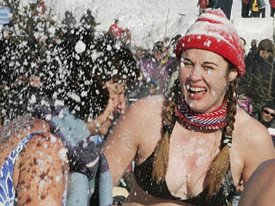 Cavorting, I blunder into the Carnaval snowman. "Je suis journaliste. Bonjour!" I chirp into the flat disk of his face. Apparently Bonhomme made a rare indoor appearance at breakfast this morning and asked for his little American buddy Amanda. Pity. I was holed up in the hotel room, editing and drinking bad drip coffee.

"What do you think of the Snow Bath?" he shouts in perfect English.

A sharp point pierces my mitt, as I paw a drift; a fake sheriff's badge. I pass it to a finned colleague in the media zone. Already Pauline is holding her head. An icy chunk hit her just above the fur earmuffs.

The Snow Bath, like so much, has unexpected edges, it seems.

One last round to go, this time all 80-odd revelers together. Knackered, I slow to a walk between the gym and arena. Pauline touches my elbow gently. Come on. Almost done. Words are worthless; this is pure animal communication. Mute, but not dumb.

The last ten minutes are remarkably short. I finally wheel around and – mamma mia – see the spectators stretching to the horizon, a 150-degree-wedge from where I stand dumbstruck. Poised between the cameras and the crowd, I brush the panic aside and excavate more snow from my décolleté.

Bruno, a Normandy tourism heavyweight – and my unofficial translator – slaps powder at me, then scampers. Despite the no-horseplay rules, I run him down and smear a snowball on his nape. No matter what the customs lady believed, he's the only other foreigner I've encountered.

I didn't expect to make it. But I'm screaming and singing and chanting, surrounded by comrades at the mound's edge, as the final whistle blows.

Posted by Amanda Castleman at 8:43 PM