AMANDA VERSUS THE VOLCANO
SANT' ANGELO, Ischia, Italy – So I fell in this volcano. No, really. Fair maiden jokes aside, it scalded. A lot.

This 1950s giant mixed Neapolitan traditions with American hot jazz and a dash of Africa. His lyrics often are sly, as in Tu Vuò Fa L'Americano (most famous now as Matt Damon's star turn in The Talented Mr Ripley).

You dance to rock and roll
You play at baseball
But money for Camel (cigarettes)
Who gives it to you?
The purse of mammà!

Do you want to be an American?
American? American?
But you were born in Italy!

I, on the other hand, seem to have the opposite problem... 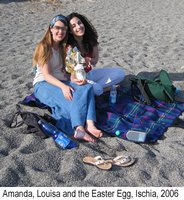 Nevertheless, I'm faking my way through Easter on an island in the Gulf of Naples. I've donned silly big sunglasses. My friends – Louisa the British-Cypriot opera student and her fiancé Alberto, a Milanese lawyer – brought a blanket, radio and a foil-wrapped show-egg, complete with a bling surprise. We've basked in the spa park, cocktailed by the harbor, savored an overpriced holiday lunch: all the usuals.

And it's all going swimmingly until I flounder into the volcano.

I did not know beach paddle ball was an extreme sport. Or that one's foot could be hard-boiled like an egg.

But going native never was easy.

Posted by Amanda Castleman at 7:04 PM