The dots connect in nearly a straight line: one degree of longitude, over 105 of latitude.

I'm standing tall. Abnormally tall. At least eight inches taller than normal, in fact, because I'm perched on a boulder, pretending to be big sister ... 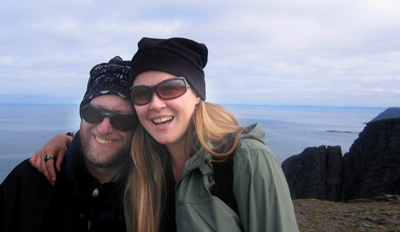 All Norway fans behind me, which is a good thing, really. Despite the scenery's splendor, the extreme society's serenity, the sense and sensibility, I chafe here.

Italy. I blame Italy. Live there and you'll never respect a crosswalk – or anything it stands for – again.

Own a motorino and your soul is lost.

That country turned my rebellious streak into an art form, dragged in three Germans to write critical essays about it, then went on summer holiday for six weeks and couldn't be bothered to read the reviews.

Nonetheless, bits of Norway will bring me back:

But my heart's back aboard the Fram, probably stuck in some ancient creosote. Surfing icebergs, the wooden polarship has been farther north and south than any other surface vessel. Now it bulges, ovoid, in an Oslo A-frame museum.

"Fram" means "forward". Or, as Hobbes the Abused 4-H Llama would have it, "gooooooooooo."

Ironically, we restless travel writers are still here. Edward and I climb onto the bridge, lace our limbs through the railings, and simply sit for an hour, at least. We ruin a lot of tourists' insincere snapshots and don't care much.

Fridtjof Nansen took her across the Arctic Ocean. Otto Sverdrup sailed into the unknown northwest of Greenland aboard the Fram. Later Roald Amundsen snuck her across the equator on his sly South Pole bid (diverting more than 12,000 miles, now that's chutzpah).

"Imagine three years aboard, surrounded by ice," I muse, thinking of the first expedition's long drift. "You would have memorized every nailhead, every harmonic of every line in every wind."

Ed laughs. "Yeah, you'd do great, judging from a week on the Nordnorge."

"No, no," I insist. "The coastal voyage is floating, the Fram is forward."

And then I understand what I need, what I've flailed at these last few months: lunching in Bosnia, riding elephants in Zimbabwe, dodging coastal brown bears in Alaska.

We buy tin mugs, replicas, one each and one for our friend's newborn.

Eventually, we send it with this note: "This cup is from the Fram, the ship that has been further north and south than any other ship in history. The word 'fram' means 'go forth,' and we think that means the entire world is a huge playground, and all you have to do is go out and play, be attentive, and it will reward you endlessly."

And our friend replies: "I have decided to frame your postcard and put it in Selina's room. It's that magical to me. You two are beyond ... beyond...."

She probably meant "sane" there, but never mind.

Posted by Amanda Castleman at 1:25 AM