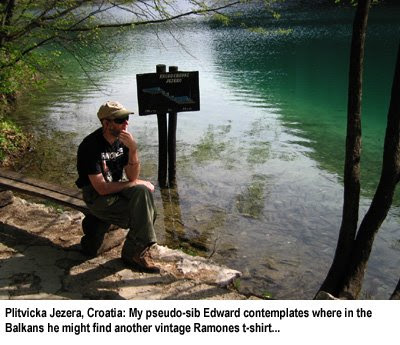 Even the best of authors have ticks, unconscious patterns they fall back on, especially under stress or tight deadlines. Emotional material, for example, makes me start repeating everything thrice. Done intentionally, that can have great rhetorical effect, as devices like the rule of three and tricolon crescendo prove. But my babbling is of the nervous, insipid variety normally reserved for blind dates. It has no place in print.

Happily, I have a writing buddy, who reigns me back in – Edward Readicker-Henderson, often honored by SATW's Lowell Thomas awards and also Best American Travel writing. His poetic musings on quiet have appeared in AARP Magazine, Forbes Traveler and National Geographic Traveler, among other outlets.

But not everyone has such a generous world-class author in their little black book. Which led me to create a travel-writing master class, featuring five instructors, via Writers.com – the online school I've taught at since 2003. That's right. FIVE. Joining me and Edward will be:
Such a diverse roster of teaching talent remains rare outside conferences. Writers.com makes it available to anyone, anywhere, as long as they have a net connection. Assignments range from tweets to YouTube, but concentrate on evolving each author's narrative voice. Explore the curriculum in-depth or take our "are you ready for the master class?" quiz.

Frankly, I would be taking this workshop, if I weren't master-minding it. Because I still have ticks, after 17 years experience, a fistful of awards and eight years as an instructor (I also teach for Seattle's Richard Hugo House and TravelWritingClass.com in Rome). Because that repetition thing needs fixing. All that unconscious babble really is a problem and I can't see it. Yes, I really should stop rehashing in emotional moments ...

In the mood for an authorial tune-up? The 12-week workshop starts January 11th, 2011 (late enrollment accepted until day 10). It costs $445, but readers can enjoy five percent off with the code MC111RAX.
Posted by Amanda Castleman at 12:55 PM