(Scuba Diving Magazine, July 2011) The Gray Angel spooks the mollies giving me a fish pedicure. Diva-style, it makes kissy faces and flashes canary-yellow pectoral fins. But what can you expect from a retired Vegas showfish?

The Mirage casino cut this one-eyed beauty from its lobby-tank chorus line. Luckily the aquarist called Bonneville Seabase, 45 minutes west of Salt Lake City, Utah. Here 2,500-odd creatures – including jacks, sharks and stingrays – find refuge in three desert hot springs. A tunnel connects the shallow, roofed White Rocks pool with the half-acre Habitat Bay, named for its air-filled conversation grotto. The Abyss – a deepwater training silo – simmers nearby at 75–86ºF. Imagine a splash of the tropics at 4,293ft in the Rockies.

Vast, prehistoric Lake Bonneville left behind the ponds and the Great Salt Lake. Today, as these dregs evaporate, the landscape grows saltier and saltier, forming the hardpan that allows land-speed records at Bonneville Speedway. It also makes the Seabase almost as saline as the Caribbean.

Experts pronounced these springs uninhabitable. Owners Linda Nelson and George Sanders tossed in handfuls of 25-cent mollies anyway. Twenty years later, the fishes’ descendents give pedicures and dodge the other 60-odd species: many of them abandoned pets, aquarium cast-offs or tropical animals blown off-course and rescued, even as far north as New York City. The Seabase pays their way to its jumble of ponds, trailers and Quonset huts, huddled beside a glider hanger and the university’s telescopes. It’s a fittingly Mad Max backdrop for Utah’s official Burning Man event (www.element11.org): four dusty, summer days of sculptures belching propane and skinny dippers in the Abyss, the 62ft cylinder that mimics sea-level conditions at 84ft.

This spring morning, we’re dressed for 69ºF surface temperatures in 7mm wetsuits. I descend, careful in the 5ft viz not to disturb the basking nurse sharks in White Rocks Bay. Instructor Lynn Findlay sometimes submerges in just shorts and allows the nine-foot critters to dogpile him, absorbing body heat. I do nothing so brave and simply palm a sandpapery flank – surprisingly warm from the geothermal vents.

Next I present a bouquet of romaine at the feeding station. A supernova of yellow erupts: lettuce-greedy porkfish. They dart and peck, devouring everything but the stalky nub. Other glamorous tropical species muscle in. In this murky Rocky Mountain spring, the scene resembles a fight over the Miss America bouquet that devolves into mud wrestling.

Like all of Utah, the Seabase surprised me with its eccentric edge and pioneer pluck. The state is mellowing its straight-laced, Mormon-settled vibe. Newly relaxed liquor laws encourage après ski celebrations. Hipsters mix in galleries, yoga studios, locavore restaurants, a sparky music scene and indie films (thanks Sundance!). The renaissance continues with a $4.5bn city-center revamp, wrapping in 2012. And outdoorsy Utah even has the U.S.’s fifth highest concentration of divers, a thriving community anchored by the Seabase.

Salt and silt aside, its waters run pure enough to drink. The University of Utah is studying the algae’s consumption of heavy metals, like mining byproducts arsenic and mercury. This layers onto centuries of legend about “healing waters”. Staff chuckle, but admit that the sick and beat-up fish they adopt recover almost uncannily. “We were told those Blue Angels wouldn’t make it,” Findlay notes. “Now they’re reproducing. In fact, all 60 species are, except the jacks. And the nurse sharks. They’re both male.”

The Seabase has plenty enough jacks, as far as I’m concerned. Caretaker Ron Simmons will feed these powerful predators on request (chip in $5 for grub). He lobs frozen chunks of rockfish at my barely submerged head. The 60lb six-foot-long Crevalle Jacks boil the water. They slice the surface: great shining arcs of fin and scale everywhere I look, two even tumbling into me. I gasp and hoot into the reg.

Laughter blooms often in this unlikely place. Misfits – from artists to communitarians and retired showfish – have carved unexpected homes from this salted earth. True to Utah’s traditions, it’s a desert revival. Dive on in.


Day 1 | Take I-80 west from Salt Lake City to dive the Seabase (snacks available onsite). Plan on 2-3 descents exploring the three bays. Back in town, take the obligatory walk around Temple Square, then stop at Squatters Pub for an ahi burger and Full Suspension Pale Ale (www.squatters.com). Check into the Peery across the street: the state’s only hotel on the Historic Registry (www.peeryhotel.com). 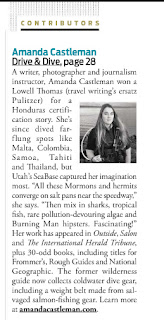 When to Go
Year-round, but viz improves in winter – as does the skiing…

Price Tag
Dive all three bays for just $20 per day, which includes a hot freshwater shower. Bring romaine lettuce to feed the fish or pay $5 for a jack frenzy. Camping at Seabase runs $8 (tent) or $18 (two-person trailer rental).

My original manuscript for "Scuba Diving Magazine," July 2011, as the story isn't archived online except via Zinio. Mileage may vary slightly...
Posted by Amanda Castleman at 5:58 PM