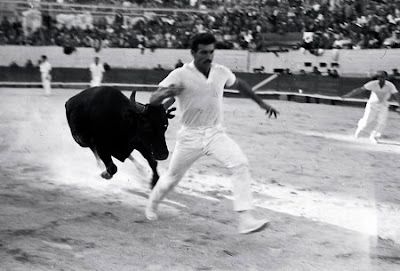 Médecins Sans Frontières has been aggressively canvassing my 'hood: Ballard, Seattle. Recently, as I braced to run the three-person corner gauntlet, a man fell in step and said, “can you spare a moment?”

“I gave already,” I replied (omitting the “directly to Haiti” part. And also the “my god, now you’re running us down like Pamplona bulls?” one).

“Oh, I don’t care. I just figured if we were talking, the volunteers would leave us alone.”

Then my fellow pedestrian flashed a wicked grin and peeled off into a café.

Ahem. Speaking of charities, my travel-writer friend Charyn has just three days left, fundraising for her yearlong, 12-country voluntourism stint, featured yesterday on National Geographic Traveler's blog. She's rapidly closing in on her $20,000 goal, but unless she hits it, she won't see a cent.

I just upped my pledge, selecting this nifty Pure Bamboo robe as a backer reward. The Global Citizen Project has other great treats, ranging from beer to books, homemade pulled pork to two nights at Mexico's Hacienda Tres Ríos Resort.

Here's a chance to bring help and exposure to twelve projects – including a Haitian relief effort – with one donation ... Not only is the Global Citizen Project a dynamic experiment in grassroots, new-media-driven funding, it's the lazy giver's Value Pack of charity goodness.

I won't hound you on the streets, folks. But please give!

Posted by Amanda Castleman at 9:42 AM