Sublime Seattle
Seattle serves up coffee, newfound chic and some of the planet’s finest coldwater descents
By Amanda Castleman

My original content, as the story isn't archived online except via Zinio. Mileage may vary slightly...

Why You’ll Go: Seattle has outgrown its ripped flannel, along with the rise of Amazon, Boeing, Starbucks and Microsoft. But America’s most educated city still heeds the call of the wild. For small talk, think snow pack and swell reports, not stock options … As one native observed: "This may be the slacker-genius capital of the world.” 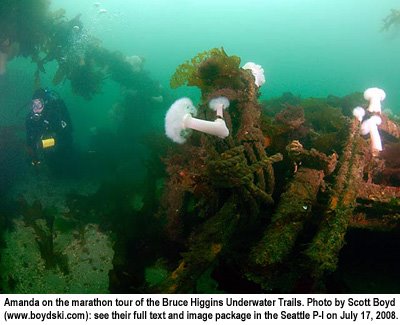 No wonder, given the “ecotopia” at their disposal. Seattle sits in Washington’s notch, pocketed by lakes and flanked by the Olympic and North Cascades ranges. Almost any view includes water, evergreens and snow-gilded peaks.

Homeport to much of the Alaskan fleet, it harbors Bering Sea crab fishermen famous from Deadliest Catch. Their boats jostle through the Hiram Chittenden Locks beside pleasure craft, gravel barges and kayaks balancing dogs on deck. Not to mention the Sockeye, Chinook, and Coho Salmon, some of which spawn on the University of Washington campus.

Sophistication increasingly spruces this former frontier town, from the new waterfront sculpture park to Rem Koolhaas's iconic Public Library, ten stories of glass-and-steel origami. Expect galleries and locavore restaurants, but not much downpour. Seattle ranks 41st for soggy US cities. But clouds can linger low and grey, so visit during the golden late summer or early autumn.

Where You’ll Stay: Roll Gold-Rush style at the Arctic Club Hotel downtown. Nearby The Edgewater unfurls views of the white-capped Olympics from Elliot Bay’s shores. Detour 30 miles south to Salish Lodge, poised between the 268-foot Snoqualmie Falls and Cascade crags (including Mount Si, the Twin Peaks icon and a popular 8-mile climb).

What You’ll Eat: Surface at West Seattle’s Alki Beach and retire to Salty’s for steak, seafood and a city-skyline panorama. Rent a kayak or wooden boat, then paddle to Ivar’s, a replica cedar longhouse. Or test the mettle of celebrity Chef Tom Douglas at Dahlia Lounge, three blocks north of Pike Place Market.
Posted by Amanda Castleman at 11:45 AM